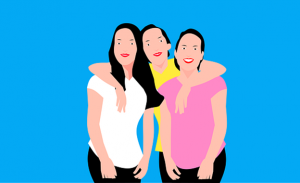 Friendship takes on added significance within a child’s life because of the growing importance of peers and the peer group for the individual’s well-being. It provides close companionship, validation, emotional support, and security for adolescence. In specificity, reciprocated friendship helps the individual feel less lonely, giving them higher self esteem, and helping them become less vulnerable to social distress. It is seen that same ethnic friendships are associated with stronger private regard. While on the other hand, cross-ethnic friendships were associated with less perceived vulnerability. Either way, friendship is a great way to promote development in many aspects for adolescents.

Young children create their own cliques and begin to socialize, finding their own identity within their chosen friend group. Despite the fact that children usually prefer same-ethnic friendships, classrooms are becoming more diverse which is promoting cross-ethnic friendships as children are more focused on similarity on characteristics rather than race/ethnicity when it comes to making friends.

Homophily (similarity) and propinquity (availability) are two important determinants to look at when looking at friendship choices. They help explain the likelihood of whether youth are willing to cross ethnic boundaries when selecting friends. Homophily refers to the similarities in traits such as gender, race, and ethnicity that adolescents focus on when choosing friends. Propinquity relates to when individuals produce friendship based on the space they share with one another.

Children usually show preference for same-ethnicity peers to the extent where same-ethnic friendships are twice as likely to be endorsed compared to cross-ethnic friendships. Therefore, adolescence is a time when race and ethnicity takes on significance for friendships. However, similarities beyond ethnicity can also factor into the making of friendships. For example, when sharing the same physical space, such as school, this type of situation promotes the perceived similarity in characteristics, giving room for focus on what individuals relate to with each other rather than differences in race/ethnicity. In essence, homophily and propinquity processes work together to encourage cross-ethnic friendships in diverse environments such as schools that have multiple ethnic students sharing a space for learning.

Functions of Same- and Cross-Ethnic Friendships

In contrast, same-ethnic friendships help individuals who have issues with ethnic identity, as they receive the validation needed from those who share the same identity. This is due to the stronger shared feelings of belonging to a specific ethnic identity, which in return heightens a sense of who they are.

What you need to know about on Social Media and Diversity

One way that friends communicate often is through social media platforms. This is where we are able to stay connected to childhood friends and even meet new friends throughout our lives. Your child’s ethnicity has a lot to do with how your child interacts with their friends through social media. Below I will provide you with information on how your child’s ethnicity plays a role with social media. Also, the information provided is supported by Amanda Lenhart who is a research specialist that focuses on teenagers’ interactions with the internet and Sevgi Bayram-Ozdemir whose research focuses on understanding the roles of family and school in the development of positive and negative inter-ethnic relationships among youth. 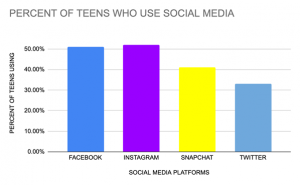 Out of the 76% of teens that use social media, these are the platforms that your child may be using often.

Some disadvantages of letting your adolescent child use social media

Something I’d like to share with you is what “openness to diversity” means. It is “an awareness and potential acceptance of both similarities and differences in others,” it can be expressed through someone’s feelings, beliefs, and behaviors. Individuals who live in “super-diverse” societies are most likely surrounded by people of different cultures, skin colors, and ethnicities. However, they are also surrounded by people who are different intellectually, in what they believe in, and what they like to do. This also goes for how their peers live their social lives on social media. The diversity itself isn’t the only benefit of growing up in a multicultural community, the adolescents vary to which “they are interested in and capable of interacting with others who are different from themselves.” Adolescents who were raised in diverse communities tend to show themselves differently online then what they really are behind the device. They do this because often they tend to be jealous that their friends seem to have a “better life” however, they are only seeing a couple of seconds of someone else’s life and not their whole life. People on social media often judge others based on what they post, but no one can tell what their life is really like behind the screen, which can be harmful.

Ethnicity has a lot to do with which friends your child makes. For example, your child may gravitate towards the child who identifies with the same ethnicity.