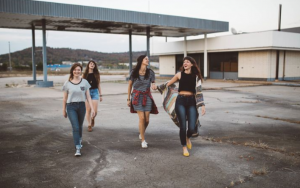 As your teen moves into middle and high school they will be exposed to many new experiences and people, and with this they will begin to make their own friends. This is a big change from scheduled play dates and kids down the street, it’s an important step in social development, and we hope to provide the resources needed to understand and guide them through this new stage of life. In the other, more specific, sections; we will talk about transitions in adolescence, the effect of ethnicity and diversity on friendships, and the effects of technology on friendships. Much of the research done on peer relationships between teens stems from the idea of cliques and crowds, which form the basis for friendships. To make these sections easier to understand, I will explain this idea here.

Many of you may look back on your days of middle and high school and think of cliques with disdain. However, the formation of cliques seems to be a natural occurrence in many modern cultures and isn’t necessarily a bad thing; it also isn’t permanent. Before we talk about cliques we must talk about crowds. Crowds are large groups of teens who share similar interests, personalities, and/or hobbies. They are based on how the members are perceived by others and help to form teens’ social and personal identity. You may remember from your own school days the “jocks” or “nerds”. These are examples of crowds, the jocks sharing an interest in sports and the nerds in academic interests. Crowds often form the basis for cliques, a clique being defined as a small group of around a half a dozen close friend. Cliques are where younger teens have the majority of their social interactions, and though often contain members of the same crowd; it isn’t rare for them to based on other factors, such as teens who grew up together or happen to share a lot of classes. It is also important to note that cliques and crowds change as time goes on. They are most prevalent near the end of middle school and the start of high school. As they age into early adulthood teens start to branch out and make friends outside of cliques and across crowds. The most important thing to remember for your own teen is that organization into cliques and crowds is natural. The best thing you can do to help them through this time is encourage them to try different things and socialize with many different peers. This increases their chances of finding a positive peer group with similar interests, as well as giving them a chance to find new hobbies.